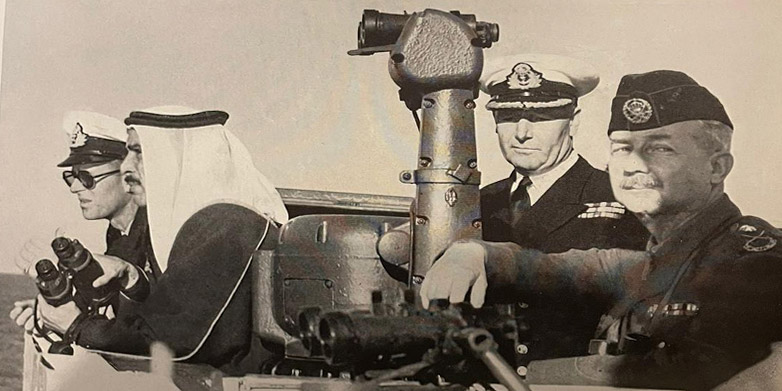 The Anglo-Jordanian Society would like to offer our deepest condolences to Her Majesty Queen Elizabeth II and the Royal Family following the death of HRH Prince Philip, The Duke of Edinburgh.

Prince Philip was a remarkable figure and a long-standing friend of Jordan. He first visited in 1950 while First Lieutenant aboard HMS Chequers. The ship docked in Aqaba and King Abdullah I sent his son Prince Talal to give the Duke a tour of the Gulf. The picture on this post shows the pair looking out from HMS Chequers’ bridge, accompanied by the ship’s captain and Glubb Pasha.

The Duke visited Jordan again in 1984, accompanying Her Majesty the Queen for a state visit on the invitation of HM King Hussein. Prince Philip and the Queen hosted King Hussein on an incoming state visit to the UK in 1966 and King Abdullah II in 2001.

The Anglo-Jordanian Society has written to HRH the Duke of Kent, our British Royal Patron, to offer condolences on behalf of the society’s trustees and members.